Good evening!
Having a little blog down time to spend with hubby this weekend and upcoming week. We plan on checking out a flea market this weekend...so I hope to have some new treasures to show you soon! Until then...enjoy your 4th of July...hope you get to see some pretty fireworks and eat yummy holiday treats!

Last week I received an email from Tiffany at Shabby Scraps offering to send me a Farm Chicks sticker! Isn't she the sweetest!?! I, of course, sent her my address. What I didn't realize is that she has a boutique...ooooo....I couldn't resist this pretty love necklace! When I received my package yesterday Tiffany had included some extra treasures! Wow, again, isn't she the sweetest!?! I love all my treasures! Thank you so much Tiffany!! And what none of you know about this city girl is that I love tractors! So cool! 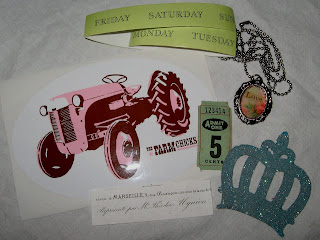 I hope these pictures show how pretty everything is! Check out that glittery crown! 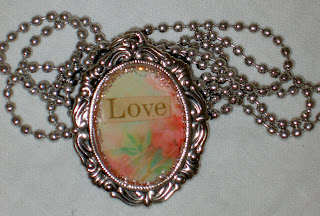 A big thank you to the sweet Mya for helping me with the cool linking thing!

I hope you all have a great day! Happy treasure hunting!
Kim
Posted by Kim's Treasures at Tuesday, June 24, 2008 18 comments:

Good morning! Thank you to all who stopped by to visit my garden pictures! It was fun seeing all the gardens, what green thumbs you all have! I found a few treasures yesterday at one of the local Salvation Army's. Hope you enjoy! 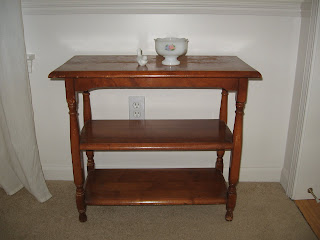 This shelf I saw in the afternoon yesterday and I told hubby I wanted
it and he looked at me like I was crazy. He doesn't always have
my vision but comes around when he sees the finished project.
I plan on painting it creamy white. So, anyway, I went back last
night and wouldn't you know that their 7:00 special was all wood
furniture 50% off!!! So I got it for only $6.50 not bad! It's really heavy
in great structural shape...just needs some sanding, stripping and paint. 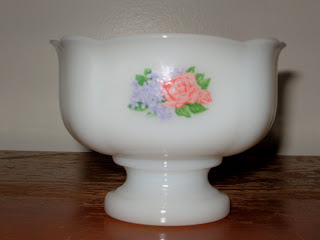 While there last night I found this Avon bowl. It looked too sweet to pass up. 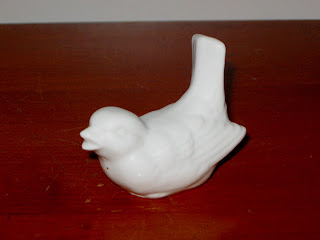 And this little birdie is cuter in person! I love birds!

So not too bad for a day! No luck at the garage sales as of late...mostly baby stuff out there. But I will be trying the flea market this weekend. Hope to find some treasures there!

Have a great day, thanks for stopping by! Happy treasure hunting!

Good morning!!! This is my first time participating in a blog party!!! This party is sponsored by Cielo at http://houseinroses.blogspot.com/. (Someday I'll figure out how to the linking thing like everyone else.) I'm really excited to share my garden and to visit yours! Hope you enjoy!!! 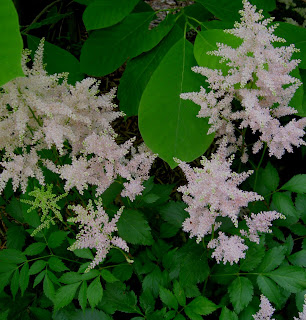 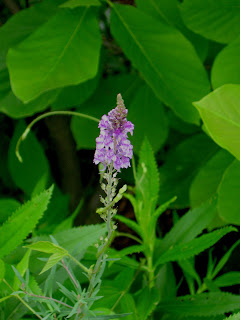 I believe this is Common Blue Toadflax with Obedient Plant and Magnolia in the background. 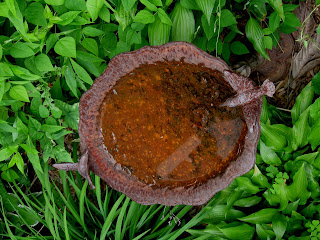 Rusty bird bath in the hostas and lillies. 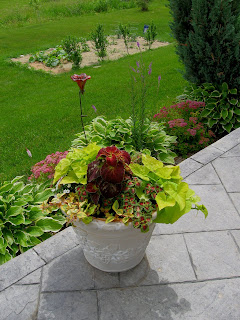 Garden pot on patio overlooking down into the vegetable garden.

This was a lot of fun! Looking forward to participating in other blog parties!!! Have a great weekend and happy treasure hunting!!!
Hugs!!
Kim
Posted by Kim's Treasures at Friday, June 20, 2008 23 comments:

Good afternoon! Here are some pics from my backyard. Enjoy! 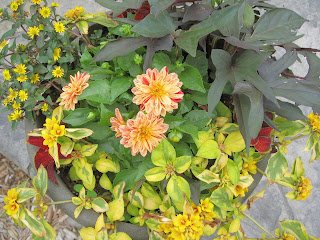 A porch pot with yellow and red striped Dahlias that DD's boyfriend
brought for her to the airport. They hadn't seen each other for
2 weeks since she was student teaching in Oklahoma. 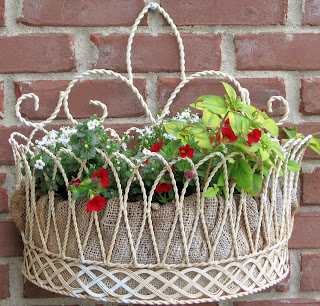 Wall basket on the wall next to the patio. 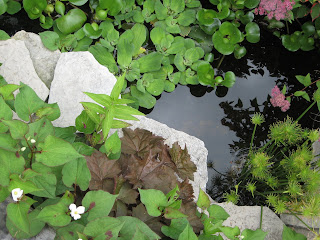 The pond where my 8 fish, 6 snails, several frogs and tadpoles live. 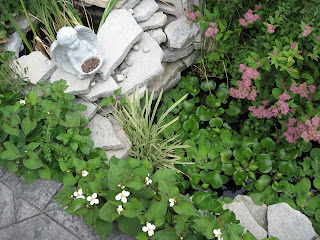 Another view of the pond with the angel who needs something in her shell. 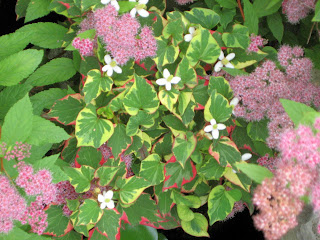 Pretty flowers in and around the pond.

Have a great day!

Good afternoon! Here are the promised pictures from last week's treasure hunt at the local Salvation Army's. The pictures aren't the greatest...I need a better system. 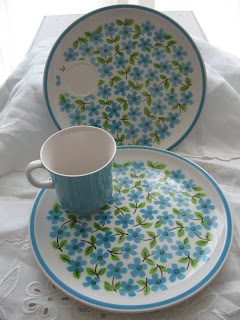 These pretty snack plates are Cera-Stone.
The pattern is Clear Day and they are by Jonas Roberts.
Tuesday was 50% off yellow tags and these had a yellow tag!!
So instead of $20 for a complete set of 4 they were $10.
I am not usually a blue person but these caught my eye
and I have been wanting snack plates similar to these
(where there is the indent for the mug). I have already
served lunch on them! We had Italian Chicken Pasta Salad
and melon. The melon was served in the mugs instead drinks. 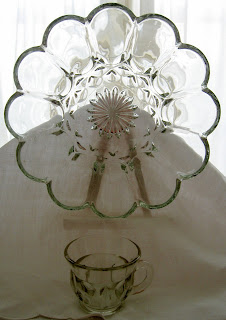 This deviled egg plate also had a yellow tag so

my price was only $2. The punch mugs I bought to

serve bit-sized desserts in...like the ones you can get

at Logan's Roadhouse, Apple Bee's and the like. They were only 79 cents

I guess that's all for today! There may be some treasure hunting later this weekend. If not, I will post some photos of treasures I found in Oklahoma, while visiting my son.

I have some treasures to share with you soon! I have been super busy getting ready for our subdivision annual garage sale! It starts tomorrow and goes through Saturday.

Good morning again! Whew! I figured it out! Let's just say...computers have never been my friend but I am learning (slowly but surely). Below are pictures from the weekend. The first are some more treasures from the garage sale where I found the other amber depression glass. This amber plate is a different pattern from the other collection. I love birds and birdhouses so these pretties will have new homes around here soon. The other pics are from my garden that is doing super well thanks to a cool early spring...now it's steaming out...we went from the 60's to the 90's almost overnight! 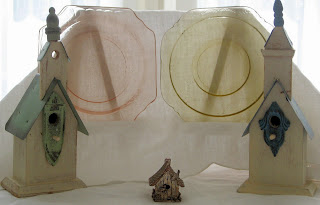 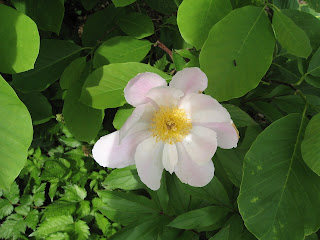 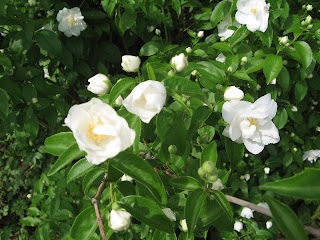 me of my Great Grandma's garden.

Thanks for stopping by! Happy treasure hunting! Hugs!

Not ignoring my blog

First, I want to thank everyone for stopping by my blog and to those who have left such sweet messages and help! I feel encouraged and excited!

For some reason, blogger says my photos are uploaded but then there is no "done" button to click so I will return later this afternoon and try again. I am not ignoring my poor blog...honest.

Happy treasure hunting and have a blessed day!

Like I said in my last post...please excuse my learning curve to blogging...for some reason I cannot fix my time zone issues which put me a day ahead. :-(
Posted by Kim's Treasures at Friday, June 06, 2008 3 comments:

First try at blogging and showing off my new found treasures 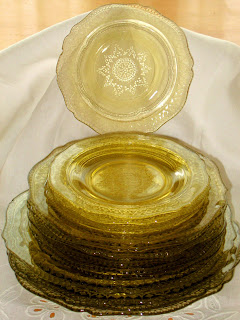 Hello to all who have found my blog, please forgive my learning curve. The picture didn't go where I thought it would...lol. Don't know if anyone will read my blog but I thought I would give it a try. Hope you enjoy!

Today was an amazing garage sale day for me. I found this stack of Patrician Amber depression glass plates hidden under some sheets of paper towel. When I asked how much for the stack of plates I had to contain my excitement...she said $5 because they are slightly chipped. (Minor chips don't bother me because I buy things that make me happy and that I know I will use. These 14 pretty plates will be hanging around my kitchen window and a few will adorn the foyer.) So, I gladly handed over my $5 for these treasures. My daughter was excited to find a "vintage" Candy Land game :-) at this same garage sale. Normally in my area you can find tons of used baby things so today was a great day for me!
Have a great day!
Kim

Please do not use my photos without my permission. Thank you!

Promote Your Page Too

Thank you for following my blog!!!

Thanks for stopping by!